skip to main | skip to sidebar

The Art of Listening (Suicide)

A reader writes of Æfintýri, ch 2-12: "I always thought Tess was a great mom who’d fought through so much to raise her daughter."

Siggi is a murderer. Siggi ingratiated herself into their home. Siggi ruined her daughter's life.

And here Siggi is, all chummy with Jada, just like before. Just like right before all hell broke loose.

So Jada may as well just shut up.

Of course, Jada won't listen to her mother. She's come to terms with Siggi in her life, ... a little bit, ... made some peace with it, this uneasy truce and compromise, and here Mom is, being all uncompromising, CALLING THE COPS? and what happened?

Exactly what Siggi said what would happen.

But did Tess listen? No. Because she's RIGHT. So she called the cops and put them through hell, because she just. wouldn't. listen. to anything other than Mom-mode: ACTIVATE.

And the stupid-demon swallowed her up, and there was nothing left of Jada, nothing left to her, except stupid.

Which also called her stupid.

This was such a hard chapter for me to write, so I had to remove myself from it, and it just wrote itself. It wrote itself so fast it was scary.

This chapter was all me. 100%. Because I was right there, with the knife in my hand, and me, screaming and crying, and our cat just looking at me, like it didn't know what to do.

I put the knife away.

And I went to bed.

Good things these are just stories, huh?
Posted by geophf at 8:37 AM No comments:

Readin' and Writin' (no 'rithmetic) 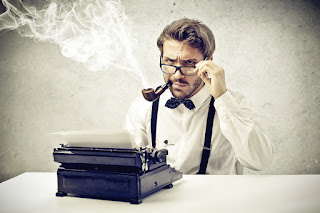 Do you know what a writer does?

A writer doesn't write. That's when a writer is most self-aware.

When a writer writes, the writer actually goes away, ... the good ones, that is. The writer disappears, and what remains are the words, being written.

Then, once written, a reader reads. Do you know what a reader does? It's so simple: being a reader, because you just read, and then you disappear into the words written, and all your troubles, cares, and worries disappear for that chapter, and you're there and you're more alive than you ever were, because you're there, in that moment, experiencing this with the characters.

A writer gives every last drop of themselves to the written word, so a reader can take it, take it all, and finally be in that blissful state of coming to be alive and who they really are, for just that one magic moment.

My very first story was Bella and her friend Angela, and they were sealing wedding invitations for Angela's wedding, this, after Edward has just proposed to Bella, as well. Then Bella started crying, because she didn't know why Edward would want to marry her, so how can she keep him from running away again ('for her own good,' he said. ... Edward is an idiot)? And Angela's answer was to hug her friend as she cried.

And I wrote that story, and I published it, and ... I got some good reviews on it. A one-pager.

Albert Einstein said: "Everyone is a genius, but if you judge a fish on it's tree-climbing ability, that's what it is to you, and that's what it becomes."

Now you. You have stories in your heart. Take your funny, yummy, happy stories, and run with them. Lock them away in your heart, and make them yours, yours, so that nobody can take them away from you.

Take your stories, all of them, one by one, and ... play with them, have fun, have tears, have adventures!

And one day, you will begin to touch hearts, and save lives.
Posted by geophf at 9:39 PM No comments:

"How's the writing coming along?"

This chapter effing sucks. I can't start it, and I can't start starting it? But you know what really sucks? Have you seen the movie 'The Shining'? You know what's the worst thing to ask a writer? 'How's the writing coming along?'

the
absolute
worst
thing
you
can
ever
ask
a
writer
is
"How's the writing coming along?"

Because there's only two(hundred and fifty-six thousand) answers.


Because there're only two possible answers to that question.

Dear reader, do you even put yourself in my position when you ask this? Nope, not even a little tiny bit, because if you did, you'd back the eff off and thank God that a story that's developed over two years, which means one chapter a month and you're asking for a chapter how many days after the last one was published?

But when you publish your first WIP and get a reader so involved in your story that you get a PM from them saying: "Hey, love your work, ... when's the next chapter coming?"

Then you'll get it.

THEN you'll be sorry. And grovel. And say to yourself: "SELF!" Because that's what you'll say to yourself when you're talking to yourself [writers do this: talk to themselves, and write about talking to themselves]. "SELF!" you'll say, "geophf was right! Why can't these readers just give me space to contemplate my navel, and to do anything but write that next chap, which I know, if I just grit my teeth and write the words, my readers will love, but will I? No! I'll say to myself: 'SELF' [so now we're two levels deep in the self-talk ... still with me?] 'I have to get this just right!' But I know what I'm really doing is just stalling, and that's just torture for a writer, and I have to get away from the keyboard, but then effing laptop does an effing OS software update for an hour when I was just settling in to write, and I get a PM from my number one fan asking for how's my writing going, when I just want to throw my laptop with my 1 hour software update out the window ... of the Empire State Building?'"

So, how my writing going?

Is it published yet? No. So you know exactly how my writing's going. It's going to hell faster than Satan sprayed with Holy Water. That's how it's going.

So, are you now glad to know how my writing's going? Why the EFF do you even ask a writer how's it going? Why don't you just take a knife and stab me in the stomach? Because that'll hurt less. Okay?

"How's the writing coming along?"
"Oh, it's coming along fine. How are you?"
"So, when can we expect to read that next chap?"
"Lovely weather we're having today."

Do you even read what every single writer in the world says about writing?

"Writing is fun and easy and I like it so much."

SAID NO WRITER EVER.

EFFING SPENT A MONTH'S WORTH OF WORK STAYING UP ALL NIGHT AND I CAN'T EVEN SEE, I'M SO TIRED, BUT YOU WANT THE NEXT ONE SO I CAN DIE OF EXHAUSTION?

You know what's the worst thing about writing? Beside everything? Is when you've written a good chapter. Why? Because you have to follow that up with something. How can you follow up a good chapter with a good chapter, when the first good chapter took everything out of you? Okay, so now I'm drained. I guess I can try to wring some water out of the rock, or blood from this stone, because that's about all I've got left.

But then, I have to do something, don't I, because what's worse than writing (remember the meat-grinder?) (which is better than writing?)? Not writing.

But no. Not only am I not writing, but I now get to answer "How's it coming along?" and pretend like I'm not an utter failure because I can't even write the word 'the' without hating it and hating myself.

But it's coming along great. Just ... great.

Writers hate themselves more than they hate everybody else in the world, which is a lot, because they can't write when OTHER PEOPLE want to say: "Hey, how's it going?" when it's going sucky. AND interrupt their writing, ... which they're not doing, so they just SCREAM at OTHER PEOPLE to LEAVE THEM THE EFF ALONE instead of blaming the real loser here, themselves, and actually doing what will make them happy, which is to actually write the thing.

So, this just happened: dénoument.

In the most recent chapter (chapter 14, "Forgiveness") of the Æfintýri, book II, Jada's mom has forgiven both Siggi and Jada for their various sins against her, so, we've come to completion for Jada's mom: she can now let go of a lot of her anger, and, instead of being an obstacle to both Jada and to Siggi, she can, well, she can do whatever, because this conflict is now done.

Not for me as the writer, because that means that everything is done and that anything can happen.

Okay, no problem: next chapter. Jada's still at the hospital and things are now "all better" for everybody. Yay! Happy-ending dénoument.

... and nothing. Not word one comes out onto the page. What to do? Massive panic? Yup. At the disco? Even better!

Okay, so, besides having a massive panic attack at the disco, what are some things that I do when the writers' block hits me?

Because you do have to write. You are a writer, and a writer writes the same as a human being breathes: to live. Writing is your life, but, more importantly: your writing gives life and hope and joy and a shared moment between you and your readers.

So, writers' block? Will it stop you, as it has stopped me? Sure. But it's there to remind you what you are: a writer, and a writer writes, and in writing, saves that one person, that one reader, who needed to read what you wrote today.
Posted by geophf at 10:08 AM No comments: 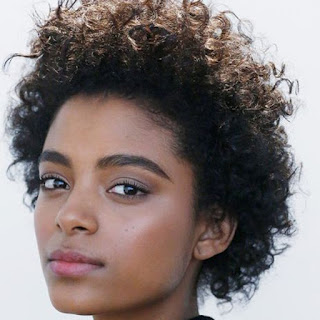 What to do when you must write that tough scene?

Jada's mom has just come home after a long shift at INOVA to find Siggi, the mass murderer, in her house, after she told Jada never to see Siggi again, and to call the cops if she did.

I'm not good with confrontation, but who is?

This is the writer's life. You have conflict: it must resolve or it must escalate, or everybody pretends to ignore the white elephant in the room.

But you, the writer, aren't writing the book to shy away from the hard choices. You, the writer, have to face them, then write them.
Posted by geophf at 6:10 PM No comments:

Writing is hard, and lonely, and disappointing, and gut-wrenching.

This site, https://750words.com, gives me the gumption (or the 'gumbo') to write every day, with

NO! NO! I DON'T! THAT'S MY EVEEL TWIN BROTHER, SKIPPY!

with 3. feeling and concerns break-down and composition in the writing
... cuz muh writin's all 'bout teh feelz 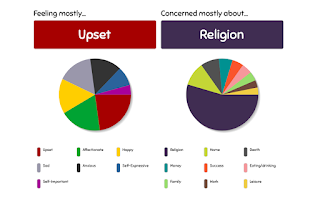 with 4. Mindset whilst writing and time orientation 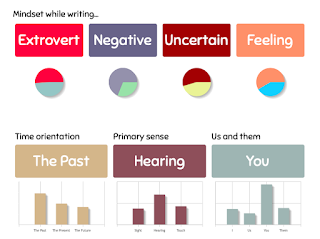 and with 5. word clouds (which you don't get to see)

And what does this all give me? It tells me where my writing is focused, and if I like that focus, I write more to that, but if I want to change my focus, I see where I am, and, as I change my writing, I see the change tracked

A writer is someone for whom writing is more difficult than it is for other people. — Thomas Mann
(by way of @HarryShannon via @itscomplicated)

"An able reader often discovers in other people's writings perfections beyond those that the author put in or perceived, and lends them richer meanings and aspects."
Michel de Montaigne (1533–1592)
(by way of Pandora.Writing)

The only end of writing is to enable the readers better to enjoy life, or better to endure it.

I do not write things that make me sad.

No. I am sad, and from that sadness, I write. I write to cope, and I write to hope.

Neither of which I do very well at all.